8 Killed In Violence During Protest Against Ministers In UP: Police 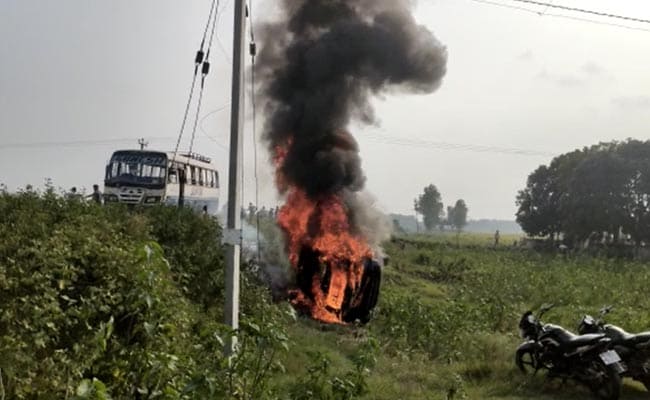 Protest by farmers broke out in UP's Lakhimpur Kheri today

Uttar Pradesh Chief Minister Yogi Adityanath on Sunday said he was "saddened" by the violence in his state that left eight people, including four farmers, dead. He promised strict action against those responsible following an investigation and made an appeal to maintain peace.

Violence broke out in Lakhimpur Kheri, Uttar Pradesh, where farmers were holding protests since this morning over a visit by Union Minister of State for home Ajay Mishra and Deputy Chief Minister Keshav Maurya. Farmers unions claimed two of the protesters were ran over by a vehicle in the convoy of the Union minister, in which his son and other relatives were seated. The other four who died were occupants of the vehicle that allegedly ran over the farmers, the officer said.

Visuals from the area recorded later showed vehicles set on fire as a man, apparently injured, lies on the ground. There is heavy police presence in the area.

Farmers unions have called upon all farmers' organisations across India to protest at District Magistrates' offices in all districts between noon and 1 pm tomorrow. Farmer leader Rakesh Tikait as well as farmers from Punjab and Haryana are on their way to the UP district.

Farmer unions have also claimed that eight farmers were injured. "In Lakhimpur Kheri, Uttar Pradesh, 2 farmers have died and 8 farmers were seriously injured after the vehicles of the ministers' convoy crushed the farmers standing on the side of the road, protesting against the programme of the Union Minister of State for Home," tweeted the Sanyukt Kisan Morcha, an umbrella body of farmers. 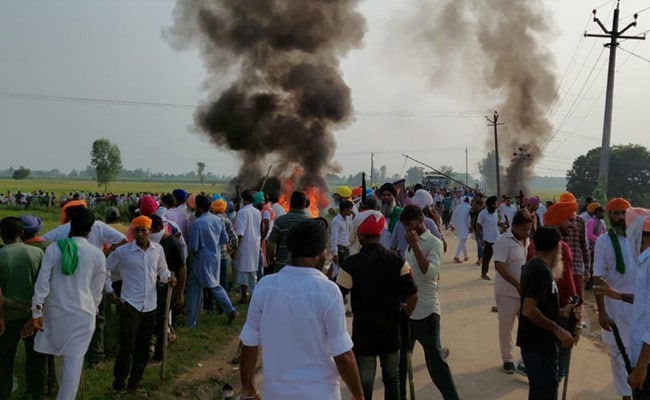 Dr Lalit Kumar, the medical officer of the district hospital in Lakhimpur Kheri, said two persons were dead on arrival and one seriously injured. "No postmortem has been conducted. They want the Union's go ahead," he added.

Mr Mishra, who is from the area, was holding a function at his village which the Deputy Chief Minister was also supposed to attend.

The farmers decided to block their visits over Mr Mishra's recent speech in which he has brushed off the protests, saying it was a protest of "10-15 people and it would take just two minutes to make them fall in line".

"The farmers had planned to gherao a helipad to stop the Deputy Chief Minister from getting off. Once that programme ended and most people were on way back, three cars came... and mowed down the farmers... one farmer died on the spot and another in the hospital," said Dr Darshan Pal, a leader of the farmers' union.

One of the leaders of the SKM, Tejinder S Virak, has been seriously injured and has been admitted to a hospital in Lakhimpur Kheri, he added.

There has been no confirmation of the deaths or injuries from the administration so far.