On the 75th Independence Day, what is the future of the Indian fashion identity globally. In 2015, Victoria and Albert Museum in London – the world’s leading museum of art and design – held its exhibition ‘The Fabric of India’. The idea was to give due credit to the thriving culture of fashion design, art and innovation in the textile traditions of our country. The opening exhibit (now obtained as part of their permanent archive) was an Abraham & Thakore saree from their Catwalk collection 2015, which was a gender-fluid collection based on womenswear inspired from menswear silhouettes and patterns. It was the classic English houndstooth woven as a double ikat sari styled with an ikat houndstooth shirt. The designer duo shares that only four sarees were woven which is one of the uniqueness of Indian textiles and a testament to true luxury and a painstaking craft.

At a time, when we are fresh off or rather still in the midst of the famous or infamous – designer and fast fashion collab, and just in time for Independence Day, one wonders what is the global Indian fashion identity or legacy? A lot is being talked about the saree going global through this collaboration but fashion commentator Prasad Bidapa says that the global identity of India transcends the saree, which is not a garment that exports very well. “Today it’s more about textile and techniques that typify the handmade luxury of India the way designers like Abraham & Thakore, Rina Singh, Rajesh Pratap Singh and many others who command a limited but influential global following do. Even Issey Miyake in Japan uses the beautiful handlooms designed and produced in India by textile designer Asha Sarabhai for his collection he calls Haat, sold exclusively in Japan.”

TEXTILE & TRADITION
The textile traditions of India with its handwoven classics – be it Banarasis, kanjeevarams, ikats or just the good ol’ khadi – can be our handmade luxury offering to the world. But former fashion editor and writer Sujata Assomull says that India is already lending a lot to global fashion. While textiles of India are an obvious focus for most, she says that there’s also the legacy of drape, our legacy of colour, craftsmanship and embroidery. Recently, the Dior Haute Couture Autumn Winter 2021-2022 Show at the Paris Couture Week had a small Byculla connection as well. The show’s stunning backdrop — an installation drawing inspiration from French artist Eva Jospin – was created by the Chanakya Ateliers and the Chanakya School of Craft, Mumbai. (Dior's Maria Grazia Chiuri used a backdrop embroidered by Mumbai's Chanakya School of Art)Assomull says that the Indian influence is seen in the drapes at Alberta Ferretti or the embroideries used in Alexander McQueen, Gucci and Chanel, and many other luxury brands. Agrees designer Arpita Mehta who has made the craft of mirrorwork go global. “India has such a rich tradition and is so strong in its culture. Fashionwise, we have to promote an Indian aesthetic in some way or the other while interpreting it in a more contemporary way,” she says. Mehta, in the last four years, has seen the demand for quintessential India crafts and textiles go up. For her brand she has now started shipping to places like Mexico, Paris and Mauritius and not just to Indian audiences.

Designer Anushree Brahmbhatt Parekh of Label Anushree says now the “Indian look” is easily recognisable even globally. “From our statement saree to our antique zardozi and colourful embroideries like phulkari, it takes one look to recognise a ‘Made in India’ signature. Today block prints and discharge prints are big in western prêt market,” she says.

David Abraham of Abraham & Thakore – one of the most well-regarded Indian labels globally – says that we have to recognise the fact that we are one of the very few countries left that can still produce small lot, labour intensive, highly skilled craft and textiles. He adds, “And that is the true luxury in a world of growing mass consumerism and an antidote to the very real threats of environmental pollution, global warming and a growing understanding that we need to buy less, pay more for fashion that is more timeless, classic and responsible.”

Fusionwear with an Indian imprint is the way forward for Mehta. Her picks: a draped ruffle saree, a cape and kaftans and a jacket are no brainers. Abraham says, “With a history of unstitched clothing, we are limited in terms of silhouettes and cuts. So taking in western shapes/technology, we can juxtapose them with Indian fabrics, embroideries and craft techniques that can make them uniquely ours.”

Agrees Bidapa, who says that the future belongs to the Indian designer who can offer Indian products to an international audience without necessarily making that a saree or salwar kameez. “Our designers need to create a vocabulary of design that appeals to diverse markets. Many Italian & French couturiers have for decades offered the embroidery and dyeing processes of India in their collections without once acknowledging their source being this country.” The lack of credit to Indian craftsmanship by global luxury houses is what bothers Assomull too. She says that so many fashion houses globally use Indian influences but we don’t get enough credit. “Even if it’s a French or American label, if work is done in India, India needs to get credit. A lot of labels may say Made in France but it’s just put together while most of the work is done in India.”

Sanjev Marwaaha of Leffet says that each state of our country has its own unique identity in terms of weaves, designs and embroideries. “Where else in the world can you see this kind of diverse fabrics and weaves. I really think it hasn’t been explored enough and we have a lot to offer. Even our motifs are unique,” he says.

Assomull says that we need to ensure that the Made in India tag gets associated with beautiful, artisanal, and intricate work. “The global, fast and mass-produced fashion is not us. We are good at the luxurious, the slow more artisanal processes and something that we have done for centuries.”

Agrees Marwaaha, who says that our prints are extremely unique, the printing techniques like block printing wherein the pressure of your hand determines the final clarity and colour of the print is an age-old art which is very Indian to the core. To add to this, we have the kalamkaris, ajrakhs, and bagrus which have their own unique identity. He says, “Indian prints in western silhouettes look simply exemplary and has infinite options to make its way in western fashion.” 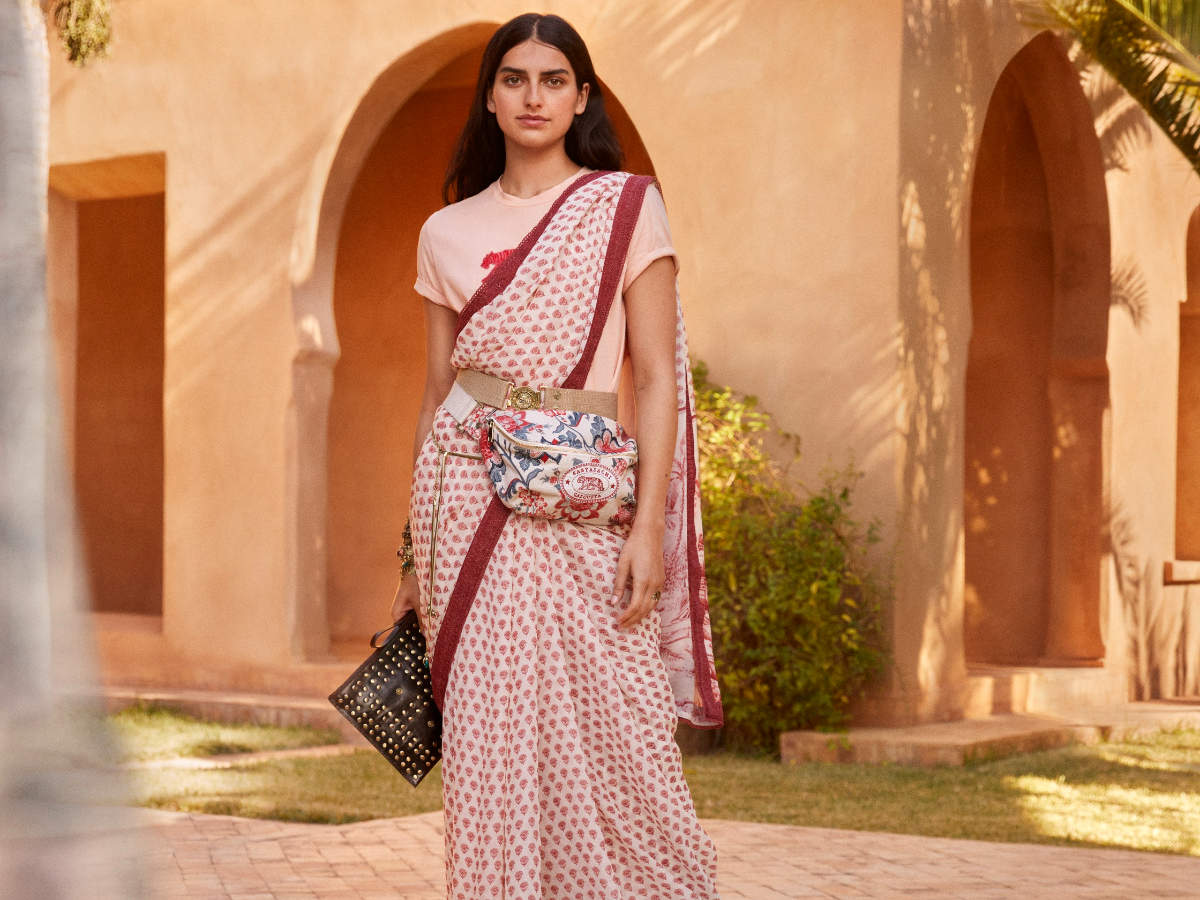 For Abraham, who counts at 11:11, Tilla and Rajesh Pratap Singh as his personal favourites, the big idea is to be able to support and promote the small craftsperson and their skills. Bidapa recounts many brands who will make the cut for forging a global Indian fashion identity like Rina Singh of Eka, Pero, Urvashi Kaur, Rimzim Dadu, Vaishali Shadangule (recently showcased at the Paris Haute Couture Week), Gaurav Gupta and Akaaro are his personal picks.

In fact he says that Sabyasachi’s tie up with H&M is a pointer towards how collaborative projects can work very well. “We in India were very blasé about his collection, saying that we’ve seen it all before, but we are not really the target market. I expect him to do very well in Europe and other markets as his work will be viewed as fresh and Indian in its concept and in its soul!” He says that the global Indian fashion identity is in the hands of our designers now, especially the younger generation to build brands that have the potential of becoming global sensations, the way the Japanese did when they started to sell at international markets. “The world needs to know and understand the luxury of Indian handloom and the various processes that are unique to our country.” And maybe then we will have an #indiancore in fashion.