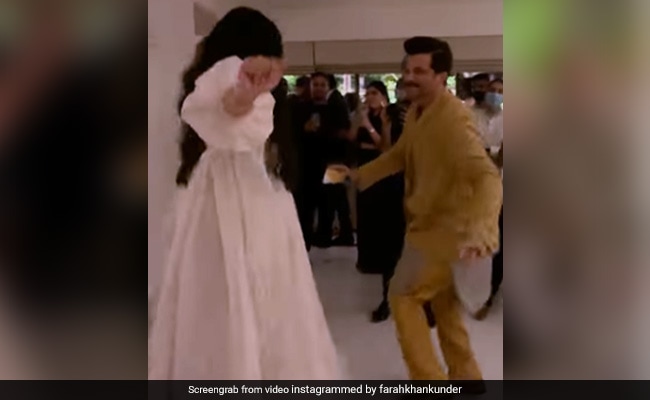 Rhea Kapoor and Karan Boolani's reception was a night to remember. It was all about fun. We got a glimpse of the festivities through filmmaker Farah Khan's Instagram entry, who shared of video of Anil Kapoor and his daughter Rhea dancing to the track Abhi Toh Party Shuru Hui Hai. Sharing the video, Farah Khan wrote: "Love this man! Best father-daughter dance Anil Kapoor style. Rhea and Sunita Kapoor, thank you for being such great hosts. Congratulations Karan Boolani." She added a heart emoji along with the post. In thw video, we also got a glimpse of Anil Kapoor's wife Sunita Kapoor and his sister-in-law Maheep Kpaoor cheering for the father-daughter duo as they danced their hearts out.

Without much ado, take a look at the video here:

After Rhea's wedding, Anil Kapoor described his family as "the biggest blockbuster ever." On Monday, he posted a picture from daughter Rhea's wedding. He also posted a family photo, which featured his wife Sunita Kapoor, daughters Sonam and Rhea, son-in-laws Anand Ahuja and Karan Boolani, and son Harsh Varrdhan Kapoor. He captioned the post: "And with that, I feel like my Magnum Opus is complete...With our 2 super-daughters and 3 super-sons, we have the biggest blockbuster ever! Our hearts are full and our family is blessed."

ICYMI, this is the post we are talking about